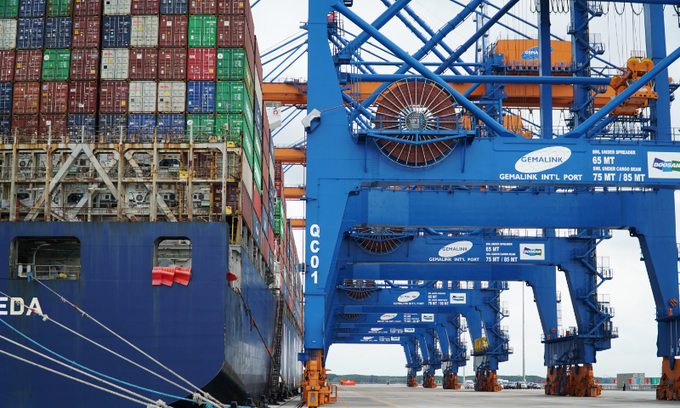 Vietnam–U.S. trade could reach $100 billion for the first time this year, up 221 times against the figure in 1995 when the two countries first established diplomatic relations.

In the first eight months, the figure hit $73 billion. Last year, it was $90.8 billion, Hoang Quang Phong, deputy chairman of the Vietnam Chamber of Commerce and Industry (VCCI), told a forum Tuesday.

In the last five years, Vietnam’s exports to the U.S. increased on average by 230 percent each year, while the figure from U.S. to Vietnam was 175 percent.

Although the Covid-19 pandemic has disrupted supply chains, many U.S. businesses have been investing in projects in Vietnam in the sectors of manufacturing and processing, clean energy, aviation, healthcare and pharmaceuticals.

On the other hand, Vietnam’s exports to the U.S. are in the areas of furniture, footwear and garments.

Ngo Sy Hoai, deputy chairman of the Association of Vietnam Timber and Forest Products, said Vietnam is the biggest exporter of wood products to the U.S.

Vietnam is also the second biggest importer of U.S. wood material behind China, he added.

Although the wood sector has targeted a value of $10 billion exports to the U.S., actual figures are likely to reach $8 billion this year due to Covid-19 impacts, he said.

Hoai added that Vietnamese companies need to pay more attention to U.S. regulations on legal logging to prove their materials were not illegally cut.

Former Vietnam Ambassador to the U.S. Pham Quang Vinh said although the U.S. cannot come back to the Comprehensive and Progressive Agreement for Trans-Pacific Partnership (CPTPP), it has made economic initiatives in digital trade, infrastructure and energy, which will offer new partnership potential between both countries.

Vietnam and the U.S. could consider another bilateral free trade agreement based on existing commitments.