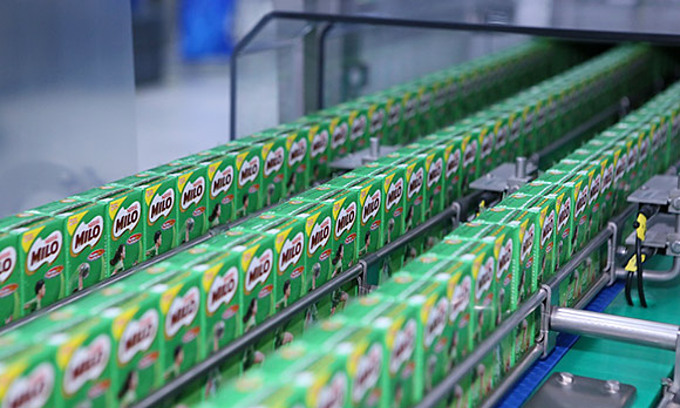 A manufacturing chain of chocolate drink Milo at a factory of Nestle in Vietnam. Photo courtesy of Nestle Vietnam

Foreign companies including Nestlé and LG continue to expand in Vietnam since they see the country’s Covid-19 setbacks as temporary.

Nestlé has announced a $132-million investment in the next two years to build a new plant in the southern province of Dong Nai.

This is part of its long-term vision as it sees Vietnam as a regional and global manufacturing hub, CEO of Nestlé Vietnam, Binu Jacob, said at a forum Monday.

There have been temporary difficulties caused by the increasing costs of the stay-at-work model and disruptions in the supply chain, but Vietnam remains one of Nestlé’s top manufacturing facilities globally, he said.

The new investment would help create new products for the Asian-Pacific markets, he said.

“The Dong Nai plant will become the biggest coffee manufacturing plant in the world.”

It has received support from the government and local leaders during the fourth wave of Covid-19, the stay-at-work model helps keep production going and South Korean experts are able to go through immigration quickly, he said.

It has been expanding its investment, purchasing manufacturing equipment for its six plants diversifying into 5G technology and laptops, he said.

“Samsung has been mostly investing in manufacturing chains in Vietnam, but from now the company will raise Vietnam’s position to a new height: a global research and development hub.”

Its $220-million R&D center in Hanoi is now 50 percent complete and set to be inaugurated by the end of next year.

Swedish company Tetra Pak announced two weeks ago an additional EUR5 million ($5.85 million) investment in its EUR120 million packaging plant in the southern province of Binh Duong that will increase its capacity by 43 percent.

LG said last month it would invest an additional $1.4 billion in its manufacturing facility in Hai Phong this year, taking the total investment to $4.65 billion.

The Asian Development Bank’s country director for Vietnam, Andrew Jeffries, said only some orders and not companies have been moving to some other countries.

Vietnam remains an attractive destination for foreign firms and would continue to benefit from the shift in global supply chains, U.S.-China tensions and disruptions in manufacturing in some regions, he added.