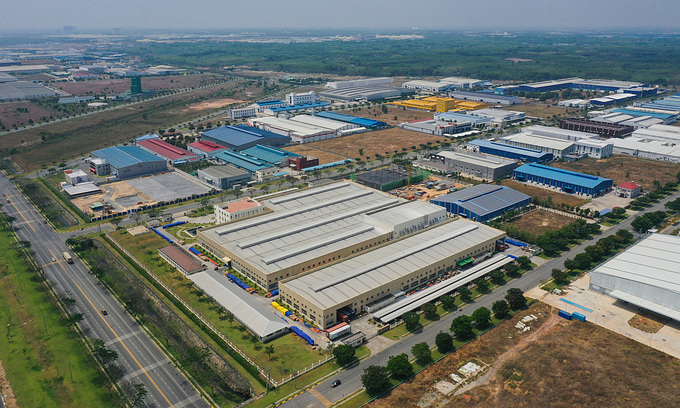 Many European and Asian headquartered multinational giants are rushing to invest in Vietnam’s industrial parks to start new production or expand operations, showcasing confidence in the country’s growth potential.

At the end of the first quarter, German lubrication giant Fuchs Petrolub announced the expansion of its Vietnam operations, renting a 20,000 sq.m area at the Phu My 3 Specialized Industrial Park (PM3 SIP) in Ba Ria – Vung Tau Province bordering HCMC to build a new factory.

With a 55-year lease contract, the German manufacturer, which has over over 90 years of experience in its field, has shown its long-term commitment to Vietnam.

Kazama Toshio, deputy general director of PM3 SIP, said that Fuchs was the second European company in PM3 SIP, opening up opportunities to attract other Western investors who want to join this coastal industrial park.

On February 17, LOGOS and Manulife Investment Management established a joint venture to acquire a modern, custom-built $80 million logistics factory with a total area of 116,000 sq.m.

In the first two months of the year, the northern Thai Nguyen Province attracted $924 million in foreign direct investment (FDI), accounting for nearly 18.5 percent of the country’s total FDI in the period. Prominent among them is the $920 million investment by Samsung Electro-Mechanics Vietnam Co. Ltd.. This has raised the total investment capital in Yen Binh Industrial Park, Thai Nguyen, to $2.27 billion.

Also in the first quarter, Denmark was the largest investor in Binh Duong, also bordering HCMC, with $1.3 billion, accounting for 78.9 percent of the total registered capital. In mid-March, Binh Duong granted an investment certificate to the LEGO Group for a project in the VSIP III Industrial Park with a capital of over $1 billion. This is LEGO’s sixth-largest factory globally and second in Asia, with the first built in Jiangsu, China.

In Hoang Mai I Industrial Park, in the north central Nghe An Province, HuaLi will build a footwear factory. The project will start in June and be completed in March 2023. When the factory comes into operation, it will have an output of 25 million pairs of footwear a year, creating jobs for about 16,000 workers.

In Nghe An’s WHA Industrial Park 1, HuaLi will build a $38 million factory on an area of 7.3 hectares. The project will start construction in August this year and be complete by June 2023. This factory will be able to produce 13 million pairs of footwear a year, creating jobs for about 8,000 workers.

The massive influx of international investment in Vietnam’s industrial real estate market has kept pushing up rents, despite the fact that they’d already been going up for the past two years.

JLL’s industrial real estate market report for the first quarter of 2022 shows that industrial land prices have maintained a strong growth momentum (up 8.5 percent) thanks to the new wave of FDI pouring into Vietnam after the restoration of flights and the opening of international borders. The average rental for industrial land is $120 a square meter.

The report said that the ready-built factory market has moved to a larger scale to meet the needs of customers, especially international ones who choose to establish or expand production in Vietnam but also want to save money and time, quickly beginning operations.

Real estate management consultancy Savills Vietnam also confirmed that Vietnam has attracted a lot of international industrial real estate developers early 2022. Besides factories, another branch of industrial real estate – data and logistics centers – is recording an increase in high-quality investments. Many big U.S. and European companies are looking for opportunities to enter the Vietnamese market and are carrying out in-depth research and analysis to select the right location, the company says.

Trang Minh Ha, Chairman of consulting and training firm North Stars Asia, said that the resumption of international flights and trade agreements are opening up great opportunities to attract more foreign capital into industrial real estate in Vietnam this year.

Ha said Vietnam was the second country in Asia (after Singapore) in terms of number and coverage of world trade agreements. The total GDP of countries that have signed trade agreements with Vietnam accounts for 53 percent of the global GDP, he noted.

He said that the U.S.-China trade war and North Korea tension in previous years have generated a trend over the last few years for South Korea and China to invest in Vietnam. Singapore and other Asian investor groups that are leading in terms of new FDI in the first months of 2022 can be an indirect investment channel for China into the Vietnamese market, he added.

One major factor in Vietnam attracting large FDI flows is its low labor cost at just 60 percent of Thailand, 31 percent of Malaysia and 25 percent of China. Corporate tax in Vietnam is also the lowest in the region at 20 percent, and there are many tax incentives being offered by different provinces to FDI enterprises. Taxes and labor costs are not the only advantages. In terms of industrial land rentals, too, Vietnam is very low compared to other ASEAN countries.

John Campbell, Head of Industrial Services at Savills Vietnam, said that Vietnam’s economy was forecast to grow positively in 2022 as domestic demand recovers and FDI flow maintains a stable increase. In addition, business conditions have improved significantly in the past five months after the challenges that Vietnam had to confront with a major Covid-19 outbreak.

Campbell predicted a promising future for the industrial real estate market this year and the coming years. He said favorable conditions for this to happen included international flights bringing back foreign investors, the government’s active support as well as the ability of domestic enterprises to recover and adapt to challenging situations.